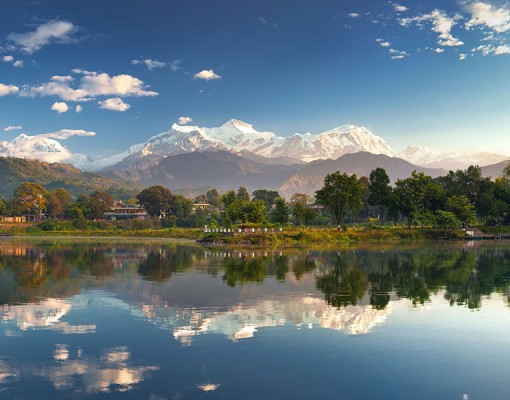 Our best-selling classic tour that will cover all that you should see in Nepal including heritage and history in Kathmandu, nature and adventure in Chitwan, beautiful snow peaks and sunrise in Pokhara and glimpses of traditional Nepali life in Nagarkot.

Upon arrival meet and transfer to hotel. Briefing and welcome drink. Late afternoon walking tour around Thamel, a popular tourist district in Kathmandu Valley and a bustling bazaar which offers a glimpse of Nepal’s vibrant ethnic culture. Evening Dinner.

After breakfast drive to Chitwan National Park, listed on the UNESCO World Heritage Site. It is the first national park of Nepal established in 1973 to preserve a unique ecosystem significantly valuable to the whole world. The park covering a pristine area of 932 sq. km is situated in the subtropical inner Terai lowlands of southern central part of Nepal. Lunch will be on the way. Upon arrival, meet and transfer to jungle lodge. Welcome drinks followed by briefing. Late afternoon short walk in the short walking tour in the Tharu Village where you can view the Tharu community’s artistically decorated thatched huts, their typical dance and how they manage life next to the national park. Evening dinner and Cultural Performance at the lodge.

After breakfast, enjoy a Long Boat Canoe Ride in Rapati River where you can see the crocodile resting at the river bank. This is one of the more serene ways to explore the area as we float downstream with the river’s flow. After that, visit the Elephant Breeding Center and free and easy at Lodge. Lunch will be served at the Lodge. After lunch, you will travel through open grassland and dense forest on an Elephant Back Ride and while doing this you will come across different wild animals including one-horned Rhinoceros, different kind of deers, wild boars, and in rare cases, tigers. Evening dinner.

After breakfast, transfer to Pokhara (200km). The Annapurna and the famous Machhapucchare (Commonly known as Fishtail Mountain) tower over the tropical setting of Pokhara. Drive takes about 5 hours. This scenic drive will offer great view of local villages, jungle and rivers. Upon reaching Pokhara, check-in hotel. Afternoon an hour Romantic Boating at scenic Lake Fewa and visit Barahi Temple in the middle of the lake. Late afternoon enjoy walk around Lakeside Bazaar for some delightful shopping bargains. Evening dinner.

Early morning, drive up to Sarangkot (1200m) sunrise view point for 30 minutes. Expect a very spectacular view of sunrise over the whole Annapurna range including the Machhapucchare of height close to 7000m. After sunrise, drive back to Pokhara for breakfast. After city tour visit Tibetan Refugees’ Camp, Devi’s Fall and Mahadev Gupteswar Cave. Evening Dinner.

After breakfast, drive to Nagarkot via Kathmandu. The sunrise and sunset from this popular hill resort present you the breathtaking view of the Eastern Himalayan Range including Mt. Everest which can be seen on a clear day. It is a scenic drive with lots of lovely quaint little houses and paddy fields. Drive takes about 6 hours. Lunch will be on the way. Upon arrival check in Resort. Enjoy a relaxing short nature walk and catch the gorgeous sunset. Evening dinner.

Awake in the morning to the cold but stunningly spectacular sunrise over Nagarkot Hill. The first ray of the sun firing the peak glimmering red, slowly lighting the Himalaya range. Mt Everest in the far east and Langtang and the Dhaulagiri peak in the west.

After breakfast, drive back to Kathmandu. On the way, visit Kathmandu Durbar Square, a UNESCO World Heritage Site, and if you are lucky, you will get a glimpse of the famous Kumari, the world’s only living Goddess. This complex of palaces, courtyards and temples like Hanumandhoka Palace, Kumari Ghar (Abode of the Living Goddess), Taleju temple, built between the 12th and 18th centuries, used to be the seat of the ancient Malla Kings of Kathmandu. Lunch in the city centre.

After lunch visit Bouddhanath Stupa, one of the world’s largest Stupa built in the fifth century AD. It looms 36 meters high and presents one of the most fascinating specimens of Stupa design with hundreds of prayer wheels and 108 small images of Buddha all around.

Late afternoon explore Asan Tol. It is one of the most well-known historical locations in the city and is famed for its bazaar, festival calendar and strategic location. The bazaar attracts shoppers from all over Kathmandu because of the tremendous variety of merchandise sold here, ranging from foodstuffs, spices and textiles to electronics and bullion. Asan is also one of the popular tourist spots in the city because of its architectural sights and charming ambiance.Evening enjoy a sumptuous traditional Nepalese Cuisine with Cultural Performance.

After breakfast transfer to Airport according to your flight.