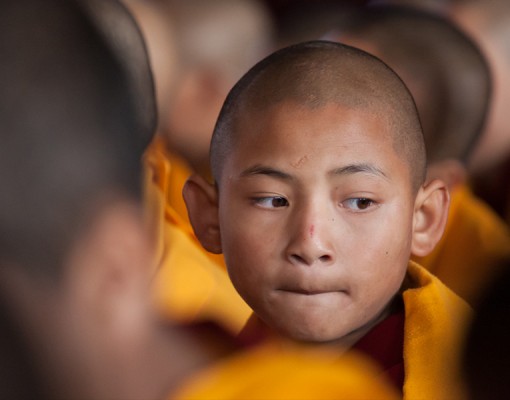 A classic circuit of holy and important sites in Nepal related to Buddha's life and Buddhism. Visit Bouddhanath, Swayambhunath, Lumbini – the birth place of Buddha, Pharping and the famous Kopan Monastery.

Upon arrival meet and transfer to hotel. Briefing and welcome drink. Late afternoon begin tour with a visit to Swayambhunath Stupa, where you can see the whole Kathmandu valley with sunset view. The Stupa, listed as a World Heritage Site, is one of the holiest Buddhist sites in Nepal and its establishment is linked to the creation of the Kathmandu Valley out of a primordial lake.

After that transfer to Thamel, a popular tourist district in Kathmandu Valley and a bustling bazaar which offers a glimpse of Nepal’s vibrant ethnic culture. Evening Dinner.

The Peace Pagoda is situated on the eastern part of Pokhara, on a hillock, and one gets good view of the city from here. It was built by the Buddhist from Manang in 1960’s. Manang is one of the most famous situated Annapurna Circuit trek. Images of Buddha and Padmasambhava are its major attractions. Moreover, beside this many monks reside here.

Early morning, drive up to Sarangkot (1200m) sunrise view point for 30 minutes. Expect a very spectacular view of sunrise over the whole Annapurna range including the Machhapucchare of height close to 7000m. After sunrise, drive back to Pokhara for breakfast.

After breakfast, a scenic drive up the hill to the World Peace Pagoda. This pagoda is situated on the top of a hill on the southern shore of Phewa Lake. It has four images of Buddha facing in our directions. The pagoda is an impressive sight and its hilltop location commands great view. It is a great vantage point, which offers spectacular views of the Annapurna range and Pokhara city. Drive takes about 45 min and about 15 min walk to the hill top. After the tour drive back to Pokhara for Lunch.

After breakfast drive to Lumbini (Lord Buddha’s birth place). Drive takes about 6 hours. On the way visit Tansen hill town for short tour around. After that continue drive to Lumbini. Upon arrival meet and transfer to hotel. Afternoon sightseeing of Maya Devi Temple and Ashokan Pillar followed by various Buddhist Temples. Evening dinner.

After breakfast drive to Kathmandu. It takes about 7 hours. Lunch will be at Riverside Spring Resort Kurintar. After lunch continue drive to Kathmandu. Upon arrival check in Hotel. Late afternoon visit short walking tour and shopping around Kings Way. Evening dinner.

After breakfast visit Bouddhanath Stupa, one of the world’s largest Stupa built in the fifth century AD. It looms 36 meters high and presents one of the most fascinating specimens of Stupa design with hundreds of prayer wheels and 108 small images of Buddha all around. After that, we visit Kopan Monastery. After the tour, drive to Nagarkot The sunrise and sunset from this popular hill resort present you the breathtaking view of the Eastern Himalayan Range including Mt. Everest which can be seen on a clear day. It is a scenic drive with lots of lovely quaint little houses and paddy fields which takes about one and half hours. Upon reaching resort check in and hot lunch. Late afternoon short leisure walk and catch the sunset. Evening dinner.

Kopan Monastery had its beginnings in the Solukhumbu region of the Himalayan mountains. In 1971 Lama Zopa Rinpoche, the reincarnation of the Lawudo Lama, a yogi of the tiny hamlet of Lawudo, fulfilled the promise of the previous Lawudo Lama to start a monastic school for the local children. The school was called called it Mount Everest Center. Twenty five monks moved down from the mountain to Kopan in 1971 – prompted by the harsh climate at an altitude of 4000 am, which made study barely possible in winter. Now Kopan is a thriving monastery of 360 monks, mainly from Nepal and Tibet, and a spiritual oasis for hundreds of visitors yearly from around the world.

Nearby is Khachoe Ghakyil Ling Nunnery, home to 380 nuns. Both the monastery and the nunnery are under the spiritual guidance of Lama Zopa Rinpoche, and the care of the abbot, Khen Rinpoche Geshe Lhundrup Rigsel. And it is the wellspring of the FPMT, a network of some 140 centers and activities world-wide, themselves expressions of the Buddha activity of Lama Thubten Yeshe and Lama Zopa Rinpoche.

Awake in the morning to the cold but stunningly spectacular dawn. The first ray of the sun firing the peak glimmering red, slowly lighting the Himalaya range. Mt Everest in the far east and Langtang and the Dhaulagiri peak in the west. After breakfast, drive to Pharping. Lunch in the city center.

After lunch transfer back to hotel. Late afternoon explore Asan Tol. It is one of the most well-known historical locations in the city and is famed for its bazaar, festival calendar and strategic location. The bazaar attracts shoppers from all over Kathmandu because of the tremendous variety of merchandise sold here, ranging from foodstuffs, spices and textiles to electronics and bullion. Asan is also one of the popular tourist spots in the city because of its architectural sights and charming ambiance. Evening enjoy a sumptuous traditional Nepalese Cuisine with Cultural Performance.

Pharping is identified with the sacred site of Yanglesho, where Guru Padmasambhava attained the level of a Mahamudra vidyadhara. There are two major practice caves in Pharping blessed by Guru Rinpoche. Above Pharping is the wel-known Asura cave. This Cave Temple is the retreat center where the monks from Ka-Nying Shedrub Ling Monastery complete the traditional three-year retreat. Secondly, one should visit the Yangleshö cave. The exact number of existing monasteries in Pharping is not recorded but it is an a established fact that recent Tibetan incomers have built no fewer than 25 additional monasteries in this area.

Pharping also has a number of temples and retreat centres, including the important Vajrayogini Temple, Chatral Rinpoche’s Monastery, and the Palyul Retreat Centre, which is the residence of Khenpo Namdrol Rinpoche and home to the Rigpa Shedra. Last but not least is Choling Monastery. The name of Padmasamba, the founder of Lamaistic School of Buddhism in Tibet is closely associated with the town of Pharping.Visitors to Pharping should plan to spend a minimum of half day to visit some of these exceptional locations.