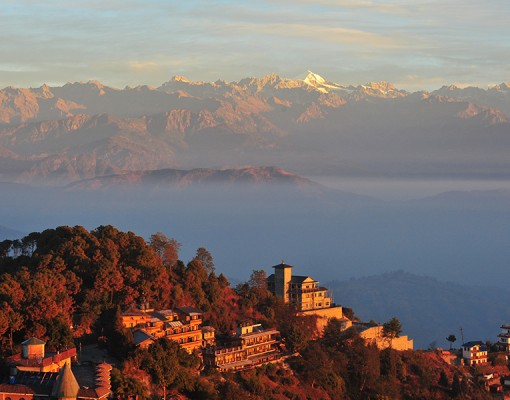 In Kathmandu, you explore world heritage sites of beautifully preserved palaces and temples. Watch beautiful sunrise and sunset with spectacular mountain range view from Nagarkot. Three out of the ten highest mountains in the world are situated nearby Pokhara making it a magical vacation.

Upon arrival, meet and transfer to hotel After that leisure walk in Thamel, a popular tourist district in Kathmandu Valley and a bustling bazaar which offers a glimpse of Nepal’s vibrant ethnic culture. Evening Dinner.

After breakfast drive to Pokhara (900m) another popular tourist destination. The Annapurna and the famous Machhapucchare (Commonly known as Fishtail Mountain) tower over the tropical setting of Pokhara. The Dhaulagiri and Manaslu ranges, each with peaks over 8000 m, can be seen from Pokhara. Drive takes about 5 hours. Upon arrival, check-in to hotel. Free at leisure walk around lake side bazaar for some delightful shopping bargains. Evening dinner.

Early morning, drive up to Sarangkot (1200m) sunrise view point for 30 minutes. Expect a very spectacular view of sunrise over the whole Annapurna range including the Machhapucchare of height close to 7000m. After sunrise, drive back to Pokhara for breakfast. After breakfast, visit Tibetan Refugees’ Camp, Devi’s Fall and Mahadev Gupteswar Cave. Afternoon boating at scenic Lake Fewa and visit Barahi Temple in the middle of the lake after that free at leisure around lakeside bazaar. Evening dinner.

After breakfast, drive to Nagarkot (2000m, -Drive 6 hrs).The sunrise and sunset from this popular hill resort present you the breathtaking view of the Eastern Himalayan Range including Mt. Everest which can be seen on a clear day. It is a scenic drive with lots of lovely quaint little houses and paddy fields which takes about one and half hours. Upon arrival, check in Resort, welcome drinks. Late afternoon enjoy a relaxing short nature walk and catch the gorgeous sunset. Evening dinner.

Awake in the morning to the cold but stunningly spectacular sunrise over Nagarkot Hill. The first ray of the sun firing the peak glimmering red, slowly lighting the Himalaya range. Mt Everest in the far east and Langtang and the Dhaulagiri peak in the west.After breakfast drive to Kathmandu.

On the way city tour to Kathmandu Durbar Square, a UNESCO World Heritage Site, and if you are lucky, you will get a glimpse of the famous Kumari, the world’s only living Goddess. This complex of palaces, courtyards and temples like Hanumandhoka Palace, Kumari Ghar (Abode of the Living Goddess), Taleju temple, built between the 12th and 18th centuries, used to be the seat of the ancient Malla Kings of Kathmandu. After that city tour visit Bouddhanath Stupa, one of the world’s largest Stupa built in the fifth century AD. It looms 36 meters high and presents one of the most fascinating specimens of stupa design with hundreds of prayer wheels and 108 small images of Buddha all around. All the Buddhist throng to this stupa to take part in the sacred rituals during the Buddhist festival.

Lunch will be in the Bouddhanath.After that we explore Asan Tol. It is one of the most well-known historical locations in the city and is famed for its bazaar, festival calendar and strategic location. The bazaar attracts shoppers from all over Kathmandu because of the tremendous variety of merchandise sold here, ranging from foodstuffs, spices and textiles to electronics and bullion. Asan is also one of the popular tourist spots in the city because of its architectural sights and charming ambiance. Evening enjoy a sumptuous traditional Nepalese Cuisine with Cultural Performance.

After breakfast, transfer to airport for departure according to your flight schedule.